THE LARGEST TRILOBITES IN THE WORD

The Geology of Canelas 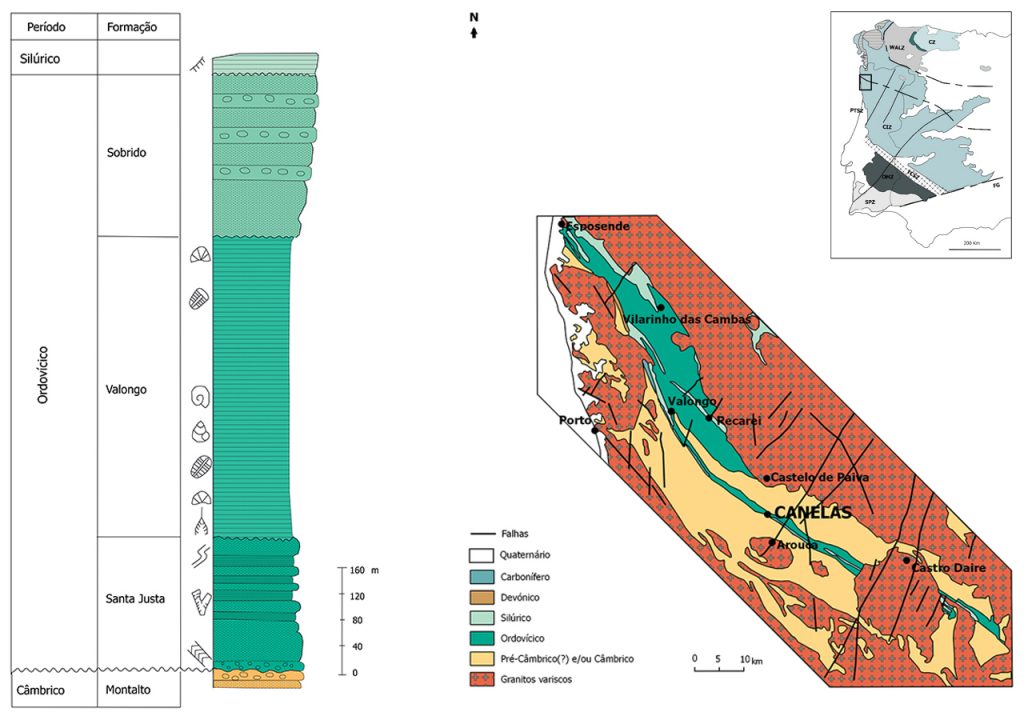 Did you know that about 540 million years ago the region of Arouca was under the sea? Indeed, the geological history of Canelas dates back to that time. In that sea, sediments from the Cambrian or even earlier deposited, having turned into schist, quartzite and conglomerate. There are also volcanic rocks from that period.

About 500 million years ago, the collision of the continental plates closed this sea, originating fractures and folds. Like it happens nowadays in the Atlantic Ocean, about 488 million years ago – during the transition from the Cambrian to the Ordovician a rift was created (which is evidenced by the presence of volcanic rocks) originating a new sea, known as Rheic Ocean.

Coarse sediments – like pebbles and sands, typically found in beaches – started depositing and later originated conglomerate and quartzite. As the sea became deeper, the sediments become thiner, originating the famous slate and other schist that are very rich in fossils and today are acknowledged worldwide as the fossil quarry of Canelas.

At the end of the Ordovician (about 444 million years ago), glacial deposits originated from icebergs and glaciers. These had belonged to a big ice mass that covered the North of Africa, then located at the South Pole, when the Iberian Peninsula was part of the African continent.

During the Silurian (444 to 419 million years ago) – after average sea levels changed due to the glaciation at the end of the Ordovician Period – sea levels started to rise again and originated clay sediments interbedded with sandy sediments, which later originated black slate and quartzite.

About 360 million years ago, the Variscan Orogeny originated a great fold, several kilometres long, known as the Valongo Anticline, which is located on the western side of Canelas.
In Carboniferous, about 300 million years ago, to the Southwest of this Anticline, rivers and lakes were formed, and a very rich flora developed on their riverbanks. Among the rocks of that period, a breccia was formed by clasts and thiner sediments that slipped from the sides of the basin, schists with fossils essentially of vegetable origin, sandstones, conglomerate and layers of coal that resulted from the existing vegetation in the area.

The most recent deposits of the region include river alluviums and terraces from the Quaternary Period.

Trilobites were undoubtedly one of the most successful groups of organisms since the start of life on Earth. Their evolution was marked by numerous advances and retreats over nearly 300 million years of stratigraphic records in the history of the planet. They appeared abruptly in the Early Cambrian period (starting around 550 million years ago), becoming extinct at the end of the Permian Period (around 230 million years ago), the last period of the Palaeozoic Era. The trilobites marked the beginning and end of this important and lengthy era.

Trilobites are classified as arthropods and their bodies are divided into three parts: cephalon (head), thorax (body) and pygidium (tail). Each of these parts comprised three lobes, a central lobe and two side lobes, hence the name trilobite. Their more detailed study shows that the central (or axial) lobe of the trilobite contained most of the vital organs associated with digestive and nervous systems. In turn, the side (or pleural) lobes not only provided a cover for the ventral appendices, but also housed other organs related to the circulatory system. It is also thought that, as for some current arthropods, trilobites’ stomach was situated under the cephalon and that they breathed through gills situated in one of the two branches of each leg. The thorax was formed by a variable number of articulated segments that allowed the carapace to roll up (or enrol) in an instinctive protective response, similar to that of modern woodlice. The eyesight of trilobites was highly developed, being the oldest known system. Their eyes fossilised easily since they comprised numerous lenses of calcite crystal.

During their growth, trilobites, like other arthropods, moulted periodically, leaving their old exoskeleton on the seabed and secreting new shells to replace them. For this reason, most trilobite fossils represent the abandoned carapaces instead of the whole trilobite. 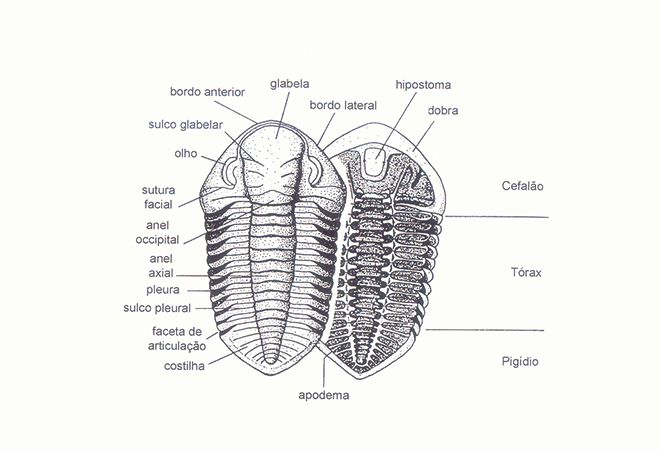 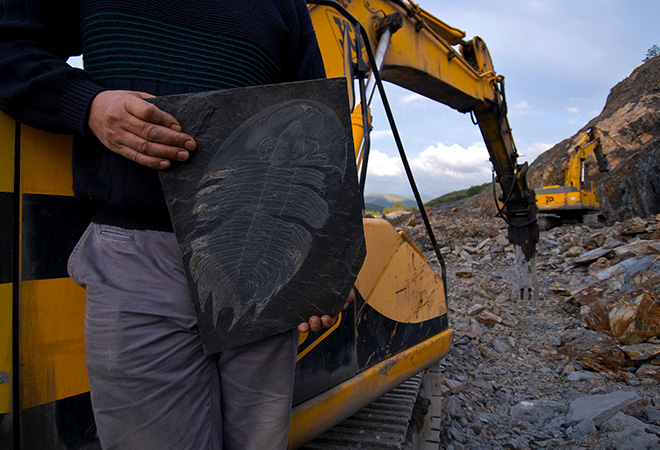 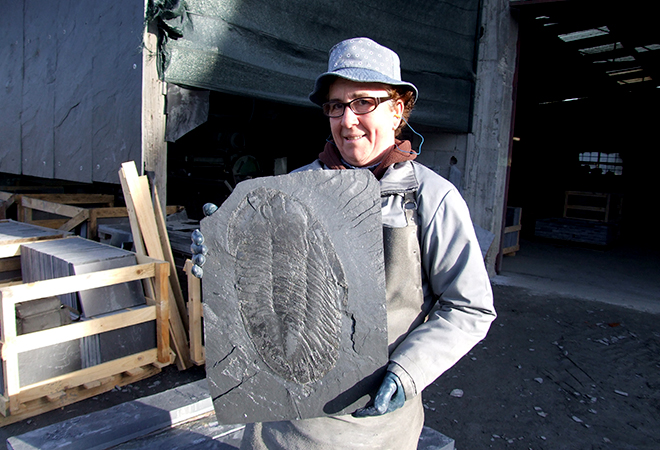 The largest trilobites in the world?

In the late nineteenth century, Nery Delgado, the Portuguese palaeontologist of international renown, described the legendary species Uralichas ribeiroi in addition to a highly characteristic morphology of the genus Uralichas (DELGADO, 1892). The great novelty of this fossil was its size, as demonstrated by the fragments that appeared and suggested that this species could have been up to 660 mm long. This world record, held by specimens from the Valongo Formation, was only beaten in 2003 by a specimen of the Isotelus rex species measuring 720 mm, discovered in Canada.

In 1956 Thadeu had already noted that the gigantism of certain species was the main characteristic of the fossils of Canelas. When Gutiérrez-Marco observed the specimens collected by 2003, he was astonished by the size of some specimens that measured over 400 mm. In 1994, Fernando Lanhas, when observing a thoracic fragment of a trilobite from Canelas, calculated that it would have been larger than any other known at the time.

In the period between 1995 and 2003, with the knowledge of the scientific community, the largest trilobites could be found in Canelas, the largest known up to that date also being a specimen of Isotelus rex, described with 430 mm.

The first giant trilobite appeared in the mid-nineties, as a moulting of Ogyginus forteyi measuring 560 mm, a record that was almost equalled in 1995 by a fantastic specimen of Hungioides bohemicus arouquensis, which, although incomplete, measured 520 mm.

Some fragments suggested dimensions even greater than 500 mm. It was once again a question of time. We had to wait more than a decade for the first sign of a specimen that would finally be close to the world record, and that day was 26 March 2007, with a specimen of Ogyginus forteyi that was quite fractured but measured at least 700 mm. As I wrote above, “one miracle follows another!” and proof of this came when less than one month later, on 24 April 2007, a new specimen of the same species appeared, this time partly enrolled. Despite this fact, and given the size of the visible part, this was undoubtedly the largest specimen found to date in Canelas. Any remaining questions were clarified in mid-2008, when the Pre-Conference tour of the 4th International Trilobite Conference – TRILO ‘08 visited the Canelas Slate Quarry. One of the scientists present, a specialist in measuring trilobites using the morphometric parameters of the cephalon, suggested a length of 856 mm. A new world record? Further studies will confirm this!

At the end of 2009 a very special event took place: the appearance of a gigantic specimen of the species Nobiliasaphus delessei (DUFET, 1875). It appeared to salute 2009 and had a body length of 530 mm. Given that its long and thin circular-section tail spine would reach the same size as its pygidium, as already observed in miraculously preserved specimens (see photo), and in this case it measures 200 mm, it is very easy to calculate that this specimen would have reached 730 mm in maximum length, being the second largest trilobite in Canelas and perhaps in the world …

To confirm this legitimacy, like a seal of guarantee of the gigantism of Canelas trilobites, some giant specimens appeared accompanied by small trilobites of different species. In one of the cases, the smaller trilobite was sixteen times smaller. Normally they are overlapped, not showing great behavioural affinities. In another specimen, its position next to the eye of the giant trilobite enables us to observe that it was smaller than the very eye of the large trilobite. 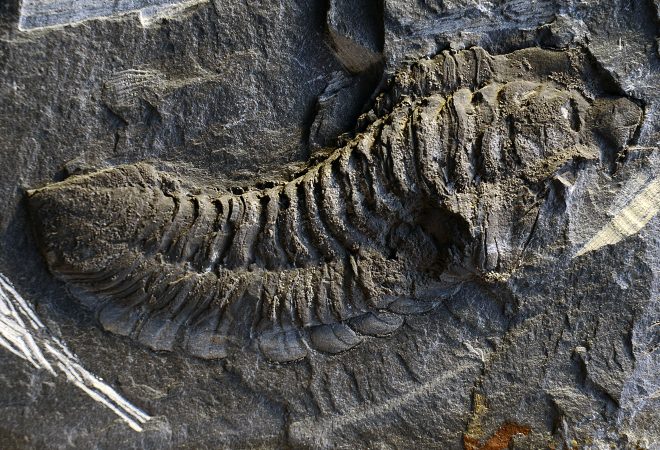 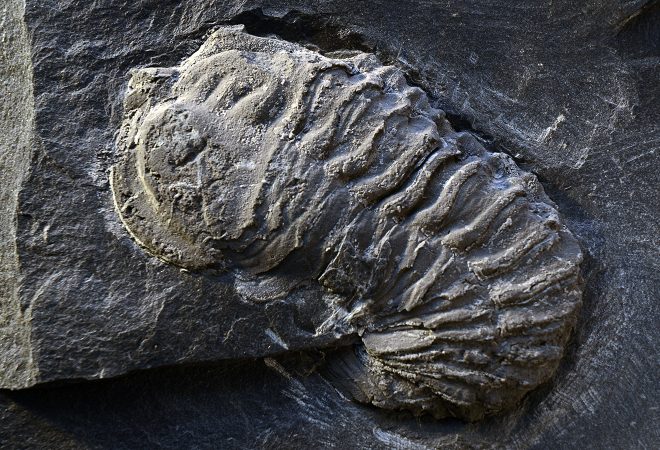 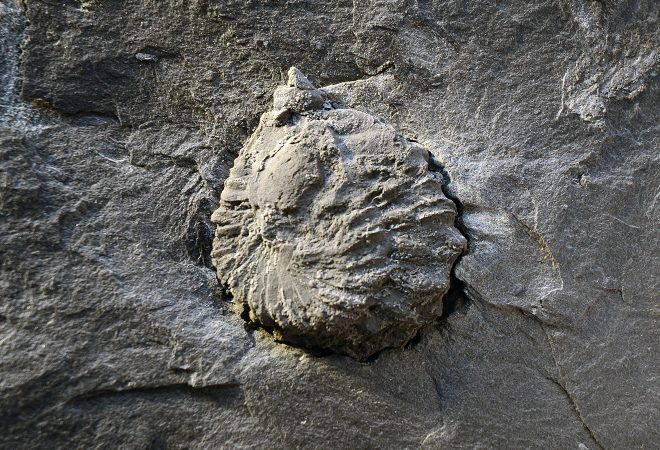 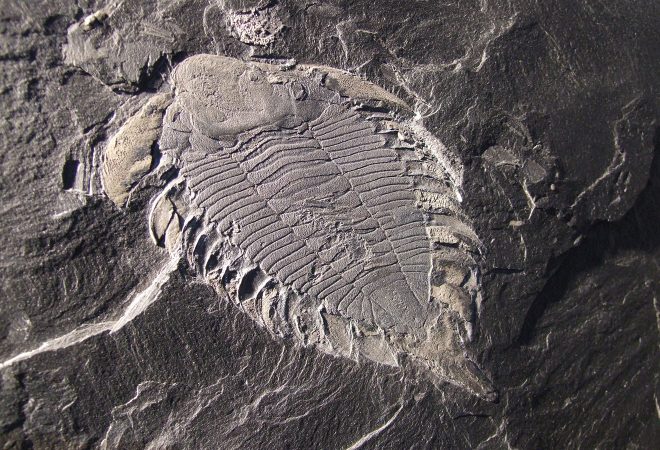 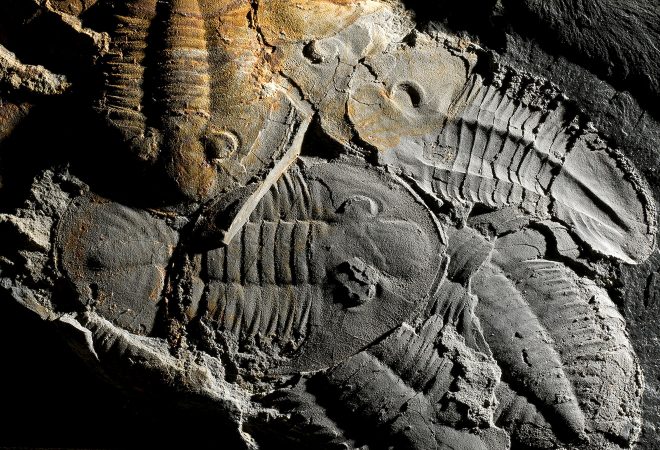 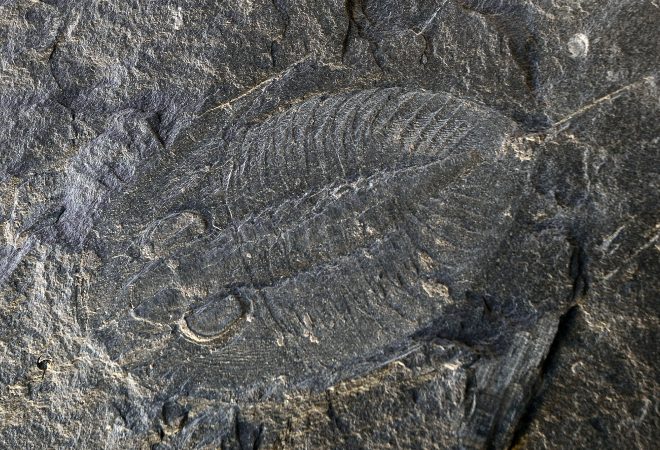 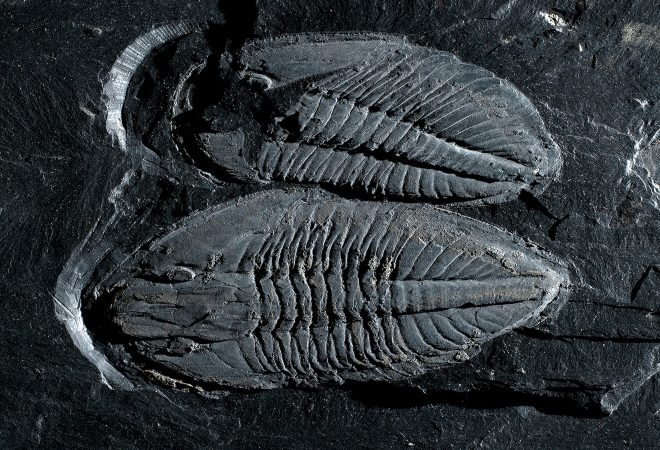 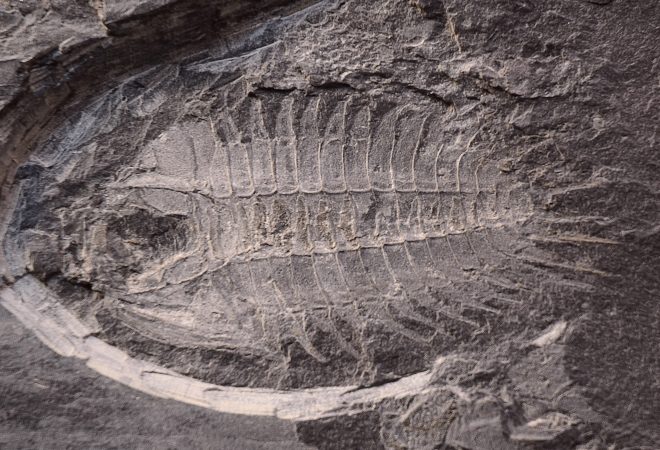 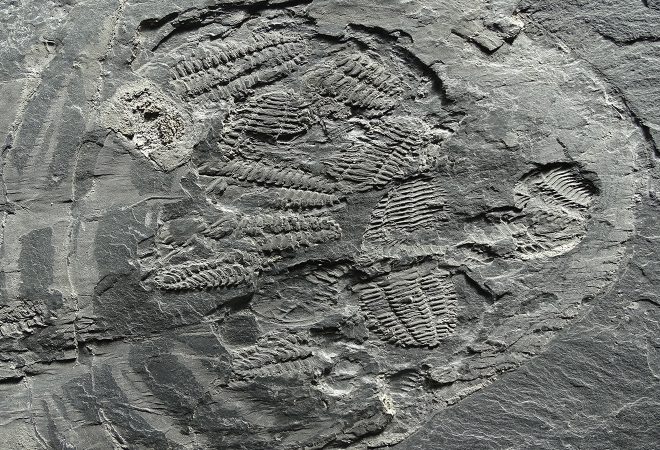 Even though the trilobites are currently the best known fossils of Canelas, many other creatures shared with them the Ordovician seafloor. Their presence is identified through the excellent fossils that the mineralised shells of many of these animals have left.

The cephalopods are important invertebrates in the Canelas’ Ordovician seafloor, where these active predators, measuring up to 2 meters, sat at the top of the food chain.

Canelas’ fossil fauna shows the products of biological activity, typical of beings that opted, in their evolution, to live under the sea floor. Thus, an interesting record of traces demonstrating the behavioural patterns associated with these organisms, known as ichnofossils, emerges in the form of habitation and/or feeding pockets.

Another example is the preservation of excrements produced by the animals dwelling on the sea floor. Recently, a new behavioural pattern was uncovered in Canelas. This ichnofossil is made out of a series of chambers, from which ascending galleries were raised and completely filled with faecal pellets.

They are sedimentary structures resulting from the centripetal growth of bacterial colonies around cephalopods deposited on the sea bed while still in decomposition. This growth is due to the exhalation of organic fluids in an oxygen-poor environment, favouring bacteria that “breathe” sulphur and “excrete” pyrite.

TRILOBITES ARE THE MOST FAMOUS ANIMAL OF THE PALEOZOIC ERA

This website uses cookies to improve your experience while you navigate through the website. Out of these, the cookies that are categorized as necessary are stored on your browser as they are essential for the working of basic functionalities of the website. We also use third-party cookies that help us analyze and understand how you use this website. These cookies will be stored in your browser only with your consent. You also have the option to opt-out of these cookies. But opting out of some of these cookies may affect your browsing experience.
Necessary Always Enabled
Necessary cookies are absolutely essential for the website to function properly. This category only includes cookies that ensures basic functionalities and security features of the website. These cookies do not store any personal information.
Non-necessary
Any cookies that may not be particularly necessary for the website to function and is used specifically to collect user personal data via analytics, ads, other embedded contents are termed as non-necessary cookies. It is mandatory to procure user consent prior to running these cookies on your website.
SAVE & ACCEPT